As the airplane began its descent into Nha Trang, the lights from the fishing boats below dotted the ocean like so many constellations in a midnight sky. It was awesome to walk through the small, sleepy airport and breathe in the fresh ocean air after living the city life these past few weeks.

I had just wrapped up three days of meetings with potential funders and collaborators across Hanoi in spacious conference rooms and humble offices alike. The breadth and depth of the charitable work being done here is amazing and I drew inspiration and perspective from many conversations with good, smart people about the current movement for the provision of inclusive education and early intervention for children with disabilities in Vietnam.

Now arrived in Nha Trang, I headed to the taxi queue with a spring in my step despite the late hour thinking about the friends here 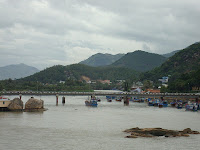 with whom I would be spending the next two days. This is what I love most about what I do. All the strategic plans, ivory tower meetings, and program development work distill down to getting to spend time with the people we are trying to serve. I was in Nha Trang to meet Hien and Marianne and lay the final plans in for our training session scheduled to take place here in a few weeks.

Hien has been a part of our Vietnam Deaf Education Program from our first summer teacher training program in 2010 as both an interpreter and a participant. Hien studied special education at university and engaged in practicum at Thuan An Center, including time under Thuy’s tutelage. Thuy had become director of the center at the start of the 2007-08 school year. She led the charge for a new early intervention program where children identified early in life with hearing loss would receive services to increase their potential to learn to listen and talk. She had her work cut out for her to build trust amongst her colleagues of this new concept and that such an investment would play out in positive ways.

Meanwhile, I arrived at Thuan An Center for the first time in late 2008. As a product of the very early intervention services that Thuy was trying to promote, she took me on a sort of dog-and-pony show to meet influential people. She would nudge me to “talk, Paige, talk” as a demonstration of what is possible for someone with a severe to profound hearing loss. Since then our friendship has taken root and we have been solid partners on this Deaf Education Program.

Fast forward a few years. Hien graduated and was back in her hometown of Nha Trang. She and Marianne, a special educator from Britain now living in Nha Trang, had become friends while working on some VSO projects together. Hien, Marianne, and her husband worked together to found Hand In Hand, a new center for children with hearing loss and developmental delays in Nha Trang.

Hand In Hand came into being right around the time that Thuy and I launched the first summer Teacher Training Program. I was impressed with Hien from the start for her astute interpretation skills and wisdom that belies her young age. She has a clear commitment that I can appreciate for helping these children reach their full potential. When it came time for us to select the locations for this March Mobile Mission, I spoke to Thuy about including Hand In Hand Center. From what I knew, Hien was doing great things in Nha Trang and I wanted to support her efforts. Thuy quickly concurred. Two other school programs in Nha Trang, the Rehabilitation Center and Sao Mai were invited to participate as well. I paid a visit last Fall and enjoyed getting to know Marianne, completing the circle of connections between the four of us – fast friends from three different countries with a shared purpose.

And so, here we were th 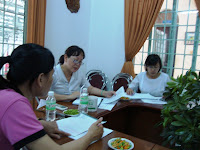 is morning….Hien, Marianne, me, and the director and vice-director of the Rehabilitation Center in the conference room. As we worked through the details of the hourly schedule and intricate logistics of our training program, we had light moments that broke everyone into a smile or laughter. I love that…we may be from different countries and backgrounds and speak different languages, but fundamentally we are all human. We feel the same emotions and want the same basic things. We all want what is best for our children. There is no better feeling than to blur cultural divides to connect and work together to achieve a common goal.