Thuy, the Director of Thuan An, and I have been working through the long list of details that need to be ironed out for the teacher training workshop next summer. With 85 teachers, 15 experts, 8 interpreters anticipated to travel to Thuan An for the one-month event, there’s a lot to nail down – everything from scouting hotels to confirming the curriculum to solidifying our budget. Along the way, we’ve met with countless government officials, academic heads, merchants, banking representatives, and others. There’s nothing like a shared goal to bring two people together, and while we were fast friends to start, we certainly have cemented our bond these past several weeks.

I imagine we’re quite the pair to onlookers as we bustle down streets or head into meetings. She, with her tiny frame and smooth olive skin a contrast to my much taller, fairer self, taking two strides for my every one, answering yet another of my inquisitive questions in animated English before switching seamlessly to a warm Vietnamese lingo as we meet our counterparts . Thuy’s full name means Fresh Autumn Water. I cannot think of a more perfect moniker for this sweet, happy woman with a big heart and a deep, old soul.

Perhaps the most time consuming element in all of this was securing a permit for the Global Foundation to work in Vietnam next summer. Not only are there many documents to create for the Vietnamese government officials, but the key ones had to be submitted in both Vietnamese and English. Given our two languages do not translate into the other very well, it takes effort to carefully choose the right words to convey a thought. This is where Thuy’s sense of humor and positive attitude has been priceless – not to mention her attention to detail and high standard for her work. She burned a lot of late night oil translating my documents last week while I was up in Hanoi. We could have hired the work out, but she insisted on doing it herself. She very much wants the Global Foundation and our workshop to be here next summer.

Thuy has excellent English comprehension, but there were complicated elements – legal language and the like – that we had to review together before she could effectively translate. She and I would sit for hours in her cheery office, with a bowl of mango, watermelon, or some other luscious fruit to give us stamina as we went through my drafts line for line. She would ask me the meaning of a word or a phrase, and I would try to explain a concept in a different 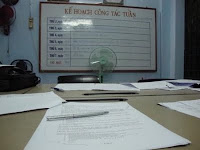 way or choose a similar word to make it clearer. Sometimes she’d scrunch her face, ponder my alternative meaning, shake her head, and say “ohhhh, I need another piece!” She’d chuckle, take a slice of fruit from the bowl with a toothpick before diving back into the document at hand. I was constantly impressed with her ability to synthesize this information in a second language. She’s a smart cookie.

After the translations were complete, she circulated them around to the other leaders of Thuan An for their feedback. I learned that in Vietnam, everything in the work environment is done by committee. No official document is sent or decision made without the approval of the full group. Adjustments and clarifications were made. Reams of paper were discarded while new copies were printed out. When we finally finished, I commented that we must have burned down a forest of trees. Thuy had not heard this American analogy before and laughed ruefully as she agreed. Later, we were using these discarded drafts as scrap paper to write notes during a conversation. I recalled Mr. Pham’s comments from last weekend (see Art of Silence blog entry) and shared them with Thuy. “See, Thuy?” I said. There is bad with the good! We used up a lot of paper in getting those permit translations absolutely perfect…but now we have plenty of scrap paper to use!”