One has to appreciate a culture that finds so much to be thankful for and celebrates it all! When I came to Thuan An last year, we honored the teachers with wreaths, cards, and a big ceremony on Teacher Appreciation Day. This time, the focus has been on the kids during the annual Children’s Mid-Autumn Festival, or Tet Trung Thu, as its called in Vietnamese. This multi-day celebration leads up to 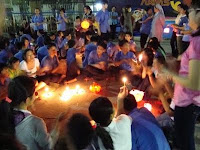 the 15th day of the eighth lunar month, the day of the first full moon closest to the autumn equinox (yeah, I know…my brain stumbled over that complex calculation too)

This Mid-Autumn party takes place during the lunar cycle at the time of year when the moon appears largest in the sky. The moon, in its partial phases, represents the potential of life. Hence, the party follows the lunar cycle as it moves towards fullness, promoting the wish that children, who are in their development stages, will likewise achieve a full life of health, happiness, and prosperity.

In many ancient agricultural cultures, when the nights got longer and the light and heat from the sun decreased in the Fall, there were prayers and ceremonies urging the sun not to forget to rise again. The lanterns that Vietnamese children play with during this festival recall the wish for the return of the sun’s warmth and light. There are several different shapes of lanterns including a five-star version that represents the sun, and a frog-shaped one that represents the moon. There are lanterns which spin around when a candle is placed inside, symbolizing the seasonal spinning of the earth around the sun.

Students from local universities and area schools have been visiting Thuan An all week to celebrate with the children here. Tonight was perhaps the best event yet with hours of carnival-like games, music, and food. When the sun dropped behind the horizon, lanterns were lit up and passed around to the kids who then went on a parade through the school grounds and surrounding streets. The night wrapped up with a large scaly Vietnamese dragon cours 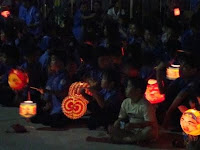 ing through the crowd of children alongside a man dressed in white wearing a moon mask. They danced together to the heavy beats of the university student drums. Thuy was quick to explain this was no Chinese dragon, but rather a Vietnamese version that expresses the duality of their festivals. This dance between the man, or Lord Earth, and the dragon was a re-enactment of the earth and sky duality, the yin and yang of the world.

It was great to watch everyone running around, laughing, and having such a fun time with it all. They are truly a family of children here – a tight-knit group that eats, studies, plays, and lives together. So many of these kids have absent families – some by fate but others because their parents failed to see how they could ever amount to anything. Thuan An has stepped into a big void in these kids lives – providing a secure and happy place where they can belong 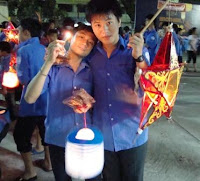 and just be kids for awhile.

When the event ended, I walked back to the hotel in the warm, humid night. The university students who put on the show headed back to the city on their motorbikes, three to a seat, waving to me as they passed by. Suddenly one of the motorbikes pulled over and a student I befriended earlier, hopped off. She enthusiastically gestured for me to join the duo for a ride to the hotel. I jogged over with a smile to accept. The good will continues on.