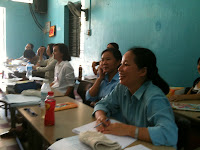 Our program is packed with information and serious stuff..but that doesn’t mean we haven’t had a lot of fun along the way. I don’t think we’ve had a single hour without laughter ringing out from at least one of the classrooms. And, when our different cultures and languages converge, well, it just adds to the comedy of it all.
For example, after our 101 sessions wrapped up during Week 1, I explained to all the participants how the rest of the program was going to unfold. That they would split up into 3 groups each following a different curriculum schedule. I encouraged them to ask questions and engage with our team, telling them to feel free to take one of our interpreters with them to ask questions of any of our professionals.

When Anh, the interpreter, translated my words, the teachers all looked a bit shocked and started laughing. I asked Anh what was so funny. She just smiled and told me not to worry about it. I later relegated the event to Thuy. She explained that students in Vietnam don’t usually approach their teachers outside of class. The idea of doing that with one of our professionals was surprising to them. Secondly, she said that in Vietnamese, one does not “take” a person to do anything…that the word “take” is only used for inanimate objects. The participants would never “take” an interpreter with them to ask one of our experts a question – it would be very rude. Rather, they would “ask” or “invite” them. Thuy said that Anh probably used the literal sense of the word instead of choosing a more appropriate Vietnamese term. 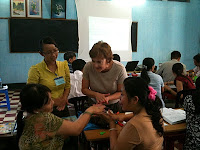 In one of the AVE sessions, Maura was hoping to use the analogy of a map to explain the concept of tracking progress to reach milestones on the way to 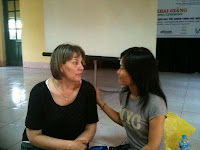 an end goal. She asked the class, “If I wanted to get from here to Ho Chi Minh City, how would I do that? How would I know I was going the right way?”

The teachers puzzled for a bit until one finally stood up and said with a smile on her face, “Actually, it is really easy. You would just go to Mr Lo’s house (another classmate) and ask him. He can take you there himself!”

Maura laughed and astutely pointed out that this unexpected response was an example of how it takes teamwork to achieve goals, whether it is finding a destination or monitoring the progress of a child.

Later, Hillary was explaining how “scaffolding” works. Scaffolding uses a child’s existing knowledge to introduce new concepts and build language. All day, Hillary had been referring to the idea of planting seeds to grow carrots. So, she used that idea again, saying that if a child understands how carrots are cultivated, you could expand on that knowledge to talk about how dragonfruit grow. The class shook their heads. No, that would not work. Carrots grow below the ground, while dragonfuit grow above ground – they are not grown the same way, they said.
Hillary responded, “Ok, yes they grow differently, but the idea is that they both grow from seed.”

Ahhh…but alas…no, said the class. That was incorrect as well. One takes a dragonfruit cutting and puts it into the ground to grow a new one. A dragonfruit comes from a tree and does not grow from seed like carrots do. Well….whatdyaknow. 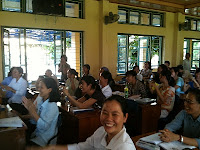 The crash course in Vietnamese agriculture aside, the class did grasp the larger take-away message that Hillary was trying to impart – that one can use existing knowledge to expand language.
Helen had a similar experience. She was pretending to be a young child in a demonstration with two participants representing the role of parents. Helen was play-acting with a piece of fake grass and some plastic animals. She had the horse, water buffalo, and cow “eat” the grass. That was all fine, but when she tried to lead the plastic pig to the grass, the “parents” said no and took the grass away from Helen.
“Pigs don’t eat grass!” they exclaimed.

Helen explained that during play, it is ok for children to have objects act in ways they wouldn’t in the real world – that play doesn’t have to be correct all the time. Such imagination in play seems to be an unfamiliar concept here, one the participants have since come to value and appreciate.

So, it has been really interesting. Its definitely one of the cool things about working across cultures and languages. Different interpretations and viewpoints can be derived from any single word, concept, or action — affecting how information is disseminated and processed. The good news is the communication flow between our team and the program participants has been wide open and our wonderful team of interpreters help to ensure things don’t get lost in translation.