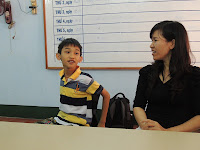 Tonight we had a Parent Workshop for about 30 local parents of children with hearing loss. We started the night with a video captured earlier in the day of a former student of Thuan An Center. He was born with a hearing loss and wears two hearing aids but has been successfully mainstreamed into his neighborhood school. This child has been a part of our summer program in the past and his mother took lessons learned to help him develop his spoken language skills. He was here today for a hearing test with our audiology program.. While he waited for his appointment,  he agreed to be filmed as an example of success for our Parent Workshop. While the camera rolled, he sat in Thuy’s office bantering away with his mother about ice cream and stickers like any other 10 year old child. 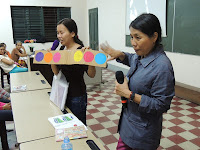 We also invited a parent who is in the Collaboration Coalition to share the story about her own young child’s hearing loss. She talked about how she worked to educate herself so that she would be better able to advocate for her child’s needs. She gave specific examples of strategies and tools that she learned through the Global Foundation’s summer programs to help her child at home such as how to make experience books to foster literacy and language. Her daughter is on target in her listening and spoken language development.

Back in 2010 on the eve of our first summer workshop, I met a father who had just learned his 2 year old daughter has a hearing loss. He was feeling helpless and concerned about his daughter’s uncertain future as he didn’t have any knowledge about deafness. He enrolled into our daytime program that year and also attended the evening parent series so he could learn everything he could about how to help his daughter learn to listen and talk.  He continued his education with us in subsequent years, set up a therapy room in his home, and sought the support of the teachers at Thuan An Center who are engaged in the Global Foundation’s program.

His daughter is now in kindergarten and doing very well. Last summer, the Global Foundation and our Deaf Education program was featured on Talk Vietnam, a Vietnamese national television show. The segment included the story of this family as an example of what is possible when children with hearing loss have access to appropriate hearing technology, trained professionals, and a committed family.  The little girl was outgoing and poised beyond her years in demonstrating her spoken language abilities in spite of a big television camera and a stranger of a cameraman directly in front of her face.  Today, this child and her father came to Thuan An Center for a hearing test by our audiology program. While she waited for her appointment, she talked away to a big circle of parents and teachers who  all were clearly inspired.  This little gal has a bright future ahead.

Back at tonight’s parent meeting, Jane gave a presentation about language development and the auditory brain. We wrapped up by answering questions from the parents that ranged from listening checks to deciding on hearing technology to their children’s language and speech. These parent nights are one of my favorite elements within our training programs because of the passion these families have for helping their children.