Heaven, Earth, and the Rain In-Between

“Be careful, your head”, the guide called over his shoulder as he shined his flashlight on me. “It is tight here. Also, be careful your back.” He nodded at my acknowledgement before turning forward to lead me hunched over through the narrow passageway. I was huddled in the 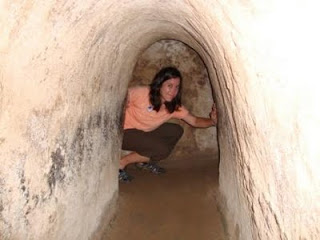 infamous Cu Chi tunnels – a massive 75-mile underground maze of secret meeting rooms, sleeping areas, triages, kitchens, and wells where the Viet Cong lived and fought during the Vietnam War. These hand-carved tunnels are part of a larger network of passageways underlying much of Vietnam that has been used throughout history to conduct warfare 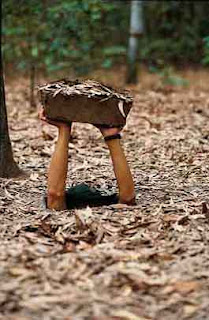 against invading armies. People dropped into these tunnels through camoflaged entryways and would live down here for years, breathing the thin air and warding off poisonous snakes and scorpions. Guerillas protected the network above-ground with vicious booby traps and snares that showcased just how inhumane war can be. As I toured the compound, I was sobered by the thought that the Taliban’s operation in Afghanistan is probably just as complex and mortifying.

After visiting Cu Chi, it was refreshing to take in the 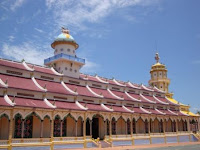 artistic beauty of the Cao-Dai Holy See Temple, the spiritual center of the Cao Dai faith. This broad religion includes elements of Buddhism, Christianity, Confucianism, and Islam, and its follower 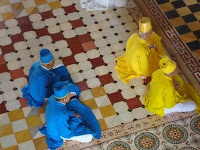 s wear either white suits or colorful robes, each color denoting the root of Cao Daism they practice. I witnessed one of their meditation ceremonies and was left mesmerized by the singing chants, woodwind music, and drum gongs 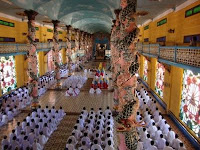 that reverberated throughout the beautiful temple.

Yesterday, an impressive tropical storm hit HCM City. I was huddled under a canopy, waiting for the Vietnam History Museum to open for the afternoon, when two men inside the art gallery next door urged me to join them. They offered me a cup of tea and we sat around a little table with me in the guest of honor seat – a green plastic lawn chair. Since we didn’t speak each other’s language very well, we used paper and a pen to draw pictures to ask questions of each other. I learned that one of the men created all of the art in t

his gallery. The impressive works looked like paintings, but were actually designs constructed of very tiny colored rocks. They tried to explain to me how it was all created, but I never quite got their gist…. Meanwhile, the rain was coming down in sheets and started to drip through the ceiling. One of the men got a bunch of sand buckets and we worked together, laughing as we jockeyed around the room to move the art, time the drips, and place the buckets to collect the rain. They seemed more concerned that their art was safe than the implications of a leaky roof.
When the museum finally opened, I said goodbye in Vietnamese and thanked them both for their hospitality. We had clearly become friends because they stopped me and took the time to correct my intonation – complete with an elaborate visual demonstration of how I should be positioning my tongue to say the words. I’m still working on it…

I’m looking forward to tomorrow’s meeting with Ms. Ngoc and her team from the HCM City National College of Education. From there, I meet up with my interpreter and head to Binh Duong province and the Thuan An Center where I will be spending the next several weeks.