Contributing to a Global Discussion

Global Foundation Executive Director Paige Stringer was honored to be invited to take part in a week-long series of meetings at the World Health Organization in Geneva related to a pending resolution that, if passed, would raise visibility of hearing loss among the WHO members states.
The first session focused on developing tools and indicators that health ministries could use in developing their national hearing health plans. It was an interesting forum on global public health policy and how hearing health specifically gets fit into that framework on a national level.
The second session featured a larger group that included representatives from the first two days and also others from different NGOs, clinics, and universities from around the world.  All the working groups were tasked to determine strategies that would unify support for the WHO efforts and raise awareness generally.
The work, and Paige’s involvement, will continue on in support of the WHO resolution effort.  It was a truly remarkable week and an honor to contribute a small role in fostering lasting change in global hearing health. 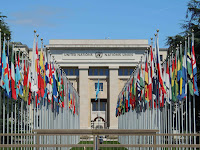